A comedy of midlife reinvention and the redeeming power of friendship. Defying midlife haze, two friends seize an unlikely opportunity to reinvent their lives, quitting their jobs to restore an old bowling alley and serve the “world’s greatest pizza.”

“To put it simply — and, yes, gratefully — ‘Phoenix, Oregon’ is the sort of movie a lot of us need right now.”

“The film ‘Phoenix, Oregon’  is a lovely and well-observed drama filled with moments of such startling clarity that at times absolutely took my breath away.” 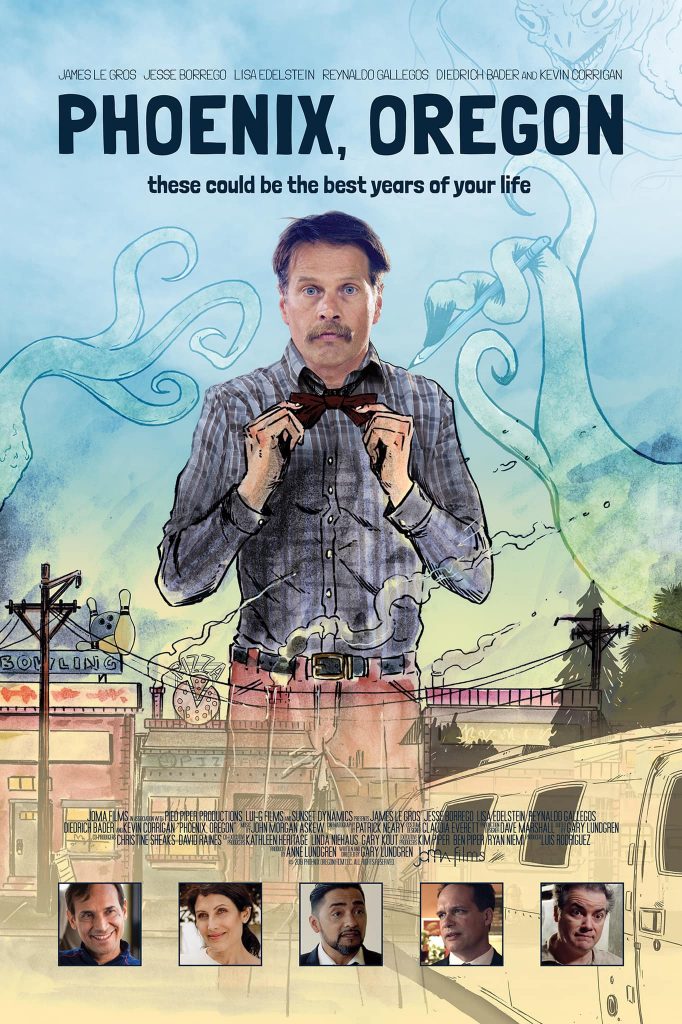 I recently had the remarkable experience shooting several scenes for Showtime’s new Twin Peaks series with director David Lynch and “Log Lady” actress Catherine Coulson. Guided by a few brief conversations with the series cinematographer Peter Deming, I worked with a small Ashland-based crew to serve as Director of Photography for all of the Log Lady sequences for this new season.

I had previously worked with Coulson on the movies Calvin Marshall and Redwood Highway, as well as several smaller projects. She not only was a gifted actress, working regularly with the Oregon Shakespeare Festival, but had been a camera operator and assistant camera on movies like Night on Earth, Star Trek II: The Wrath of Kahn, and Eraserhead, among others.

The experience of working with Lynch and Coulson – shooting in her Ashland home only days before she passed away – made for an unforgettable evening. Twin Peaks: The Return is available on Showtime and Blu-Ray/DVD. 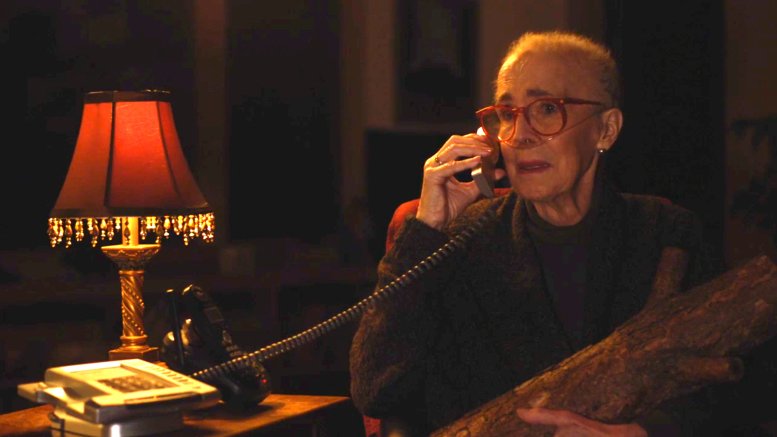 Set in the autonomous, rebel State of Jefferson in 2029, an ex-military cyborg risks his life to protect a mysterious woman from her dangerous ex. He’s aided by his A.I. implant “Clyde” who proves partner and friend.

It’s got it all: Black Road is definitely a ‘neo-noir,’ and a damn fine one at that. 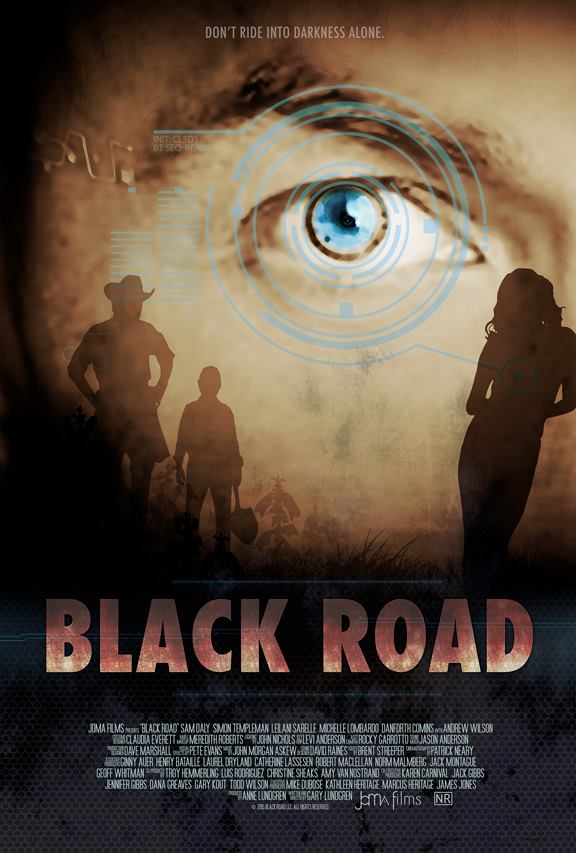 Living in a retirement community, estranged from her family, Marie decides to journey 80 miles on foot to attend her granddaughter’s wedding. Along the way, she discovers that you’re never too old to learn something about life & yourself.

Some films merit the mention of the cinematography, Redwood Highway is one of those films. Patrick Neary’s grasp of the film’s lifeblood is dazzling and nothing short of genius. He captures the majesty of the Redwood National Forest and the breathtaking beauty of the Northern California/Oregon coastline and leaves the viewer breathless, lost in their own imagination.

5 Stars. Redwood Highway is both heartwarming and courageous. A feel good movie. Redwood Highway is pure joy to watch. Every actor serves the piece with a stand-out-performance; played beautifully by Shirley Knight, with particular attention to every detail, with a special nod to Tom Skerritt. If you like warm gentle coming of age stories, see Redwood Highway and yes bring some tissue.

Downright charming. The fiercely independent Marie is someone we root for, worry about and wring our hands over in equal measure.

Shirley Knight relishes her return to the limelight. Audiences will be delighted by her warm, stirring performance. It’s a low key charmer with a large souled performance at the center. One of the best roles of her career.

A perfectly fine walkabout through the scenic roadways and nearby woods of southern Oregon, Redwood Highway delivers in high spirits and fine thesping. Anchored by a warm, full-bodied turn by septuagenarian Shirley Knight (playing Marie). Traveling with Marie is a delight. 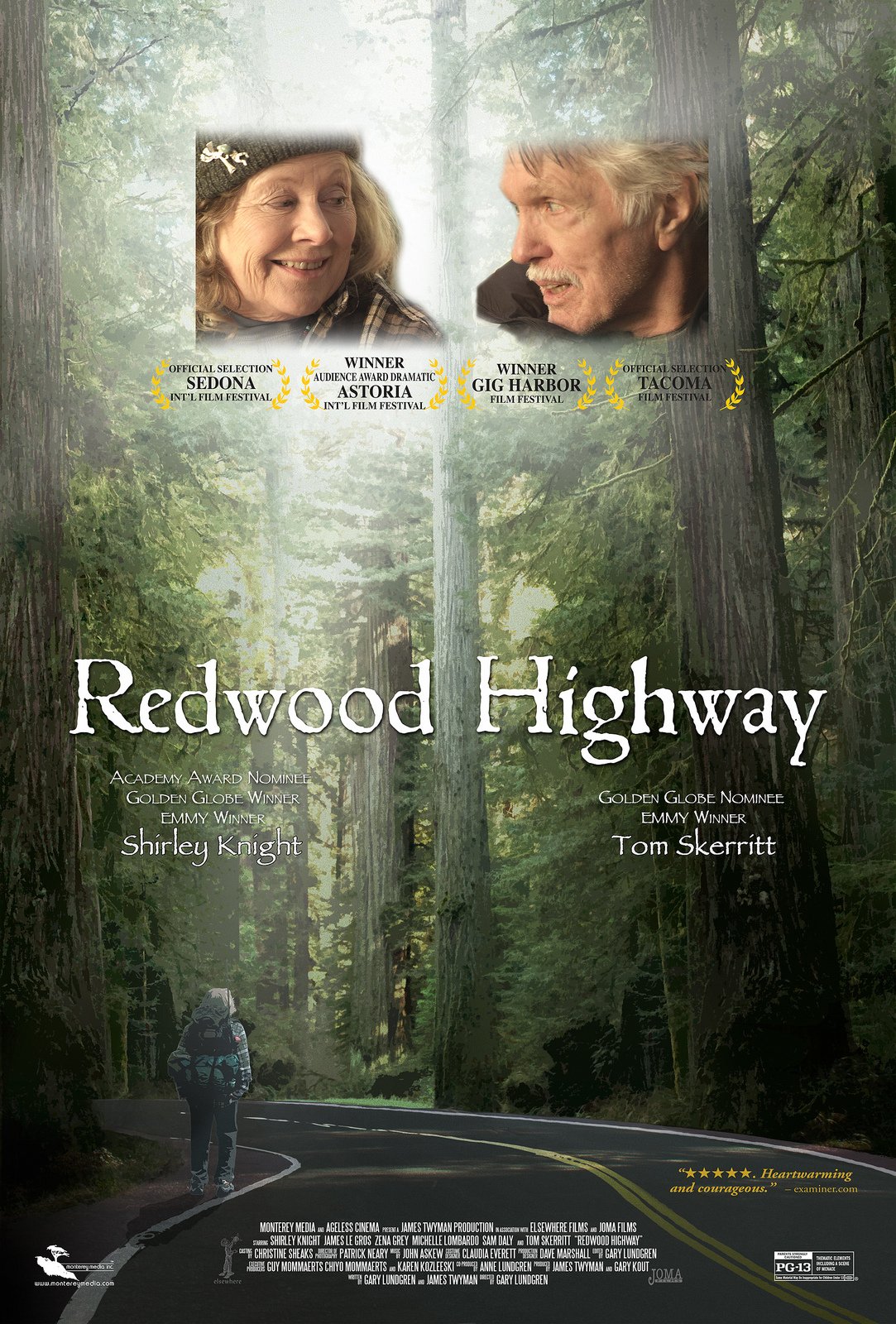 A young man pursues his childhood dream to play baseball but struggles to make his Jr. College team. A hilarious, inspiring comedy about Calvin’s journey and the people who love him most.

Builds a moving portrait of small-town life and the fallout from unrealized dreams.

Calvin Marshall is well-supported by cinematography that captures the lure of the baseball diamond, and is a must-see for any baseball movie fan. Beyond that, this timeless film speaks to anyone who’s had passion but not the talent for a particular skill or sport.

Lundgren has a light touch and a weakness for wistful indie lullabies; it is the former that gives this classic coming-of-age film its distinctive ring.

Calvin Marshall is a grand-slam comic drama that’s heartwarming, funny, inspirational and, above all, triumphant.

You’ll cheer for Calvin Marshall – the man and the movie. 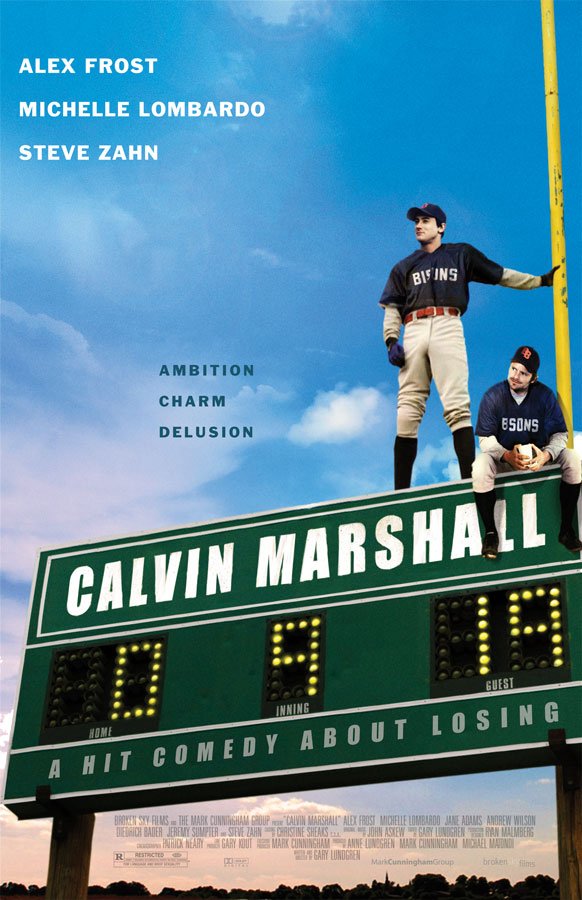 LIGHT OF MINE • FEATURE FILM

A talented photographer is losing his eyesight, so his devoted wife suggests they take a trip to Yellowstone National Park. Their relationship attains even greater depth during their poignant journey.

If a picture is worth a thousand words, then the stirringly photographed Light of Mine packs volumes into its unassuming 77-minute running time. 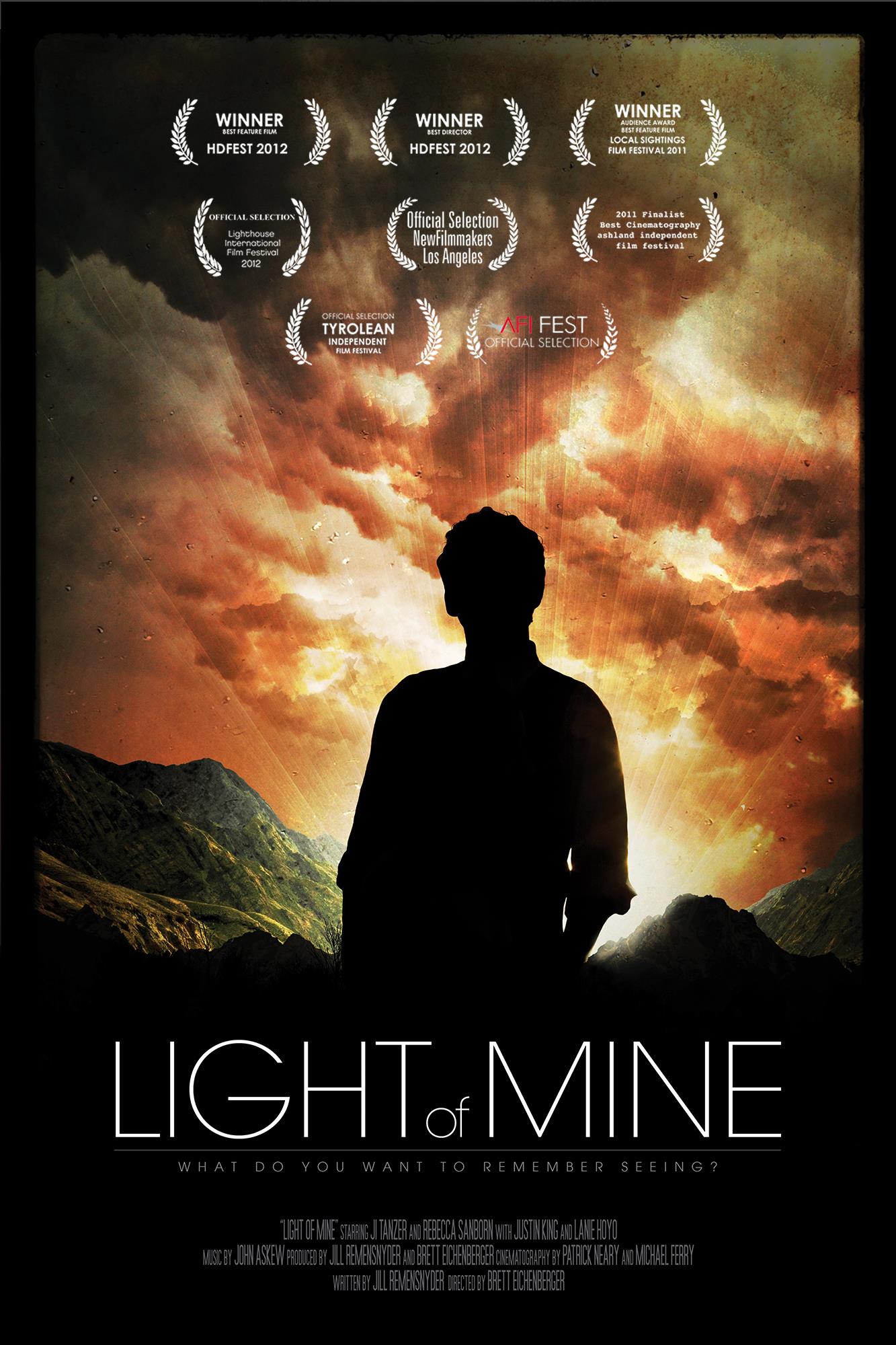 An emotionally-guarded drifter crosses paths with a phantom car responsible for a wave of supernatural violence. She must learn to trust again if she’s to end a lifetime of bad luck and help her newfound companions survive.

Nightscape is an independent thriller with flair and style… The ghostly car looks perfect streaking across the screen, sporting a pearlescent glisten which pops vibrantly.

We've Got This Covered

The unique and very Portland Pedal Powered Talk Show takes the classic talk show format and puts it on a cargo bike. Host Boaz Frankel and Phillip Ross of Metrofiets Cargo Bikes have pedaled the show to rooftops, canyon rims, shoe factories, roller skating rinks and goat fields to film interviews with unicycling bagpipers, best-selling authors, 80-year old drag queens, famous musicians and celebrities. It has been featured on all major TV stations and newspapers in Oregon as well as USAToday.com, Bicycle Times and a bunch of other places.

Watch episodes from 5 seasons at pedaltalkshow.com. 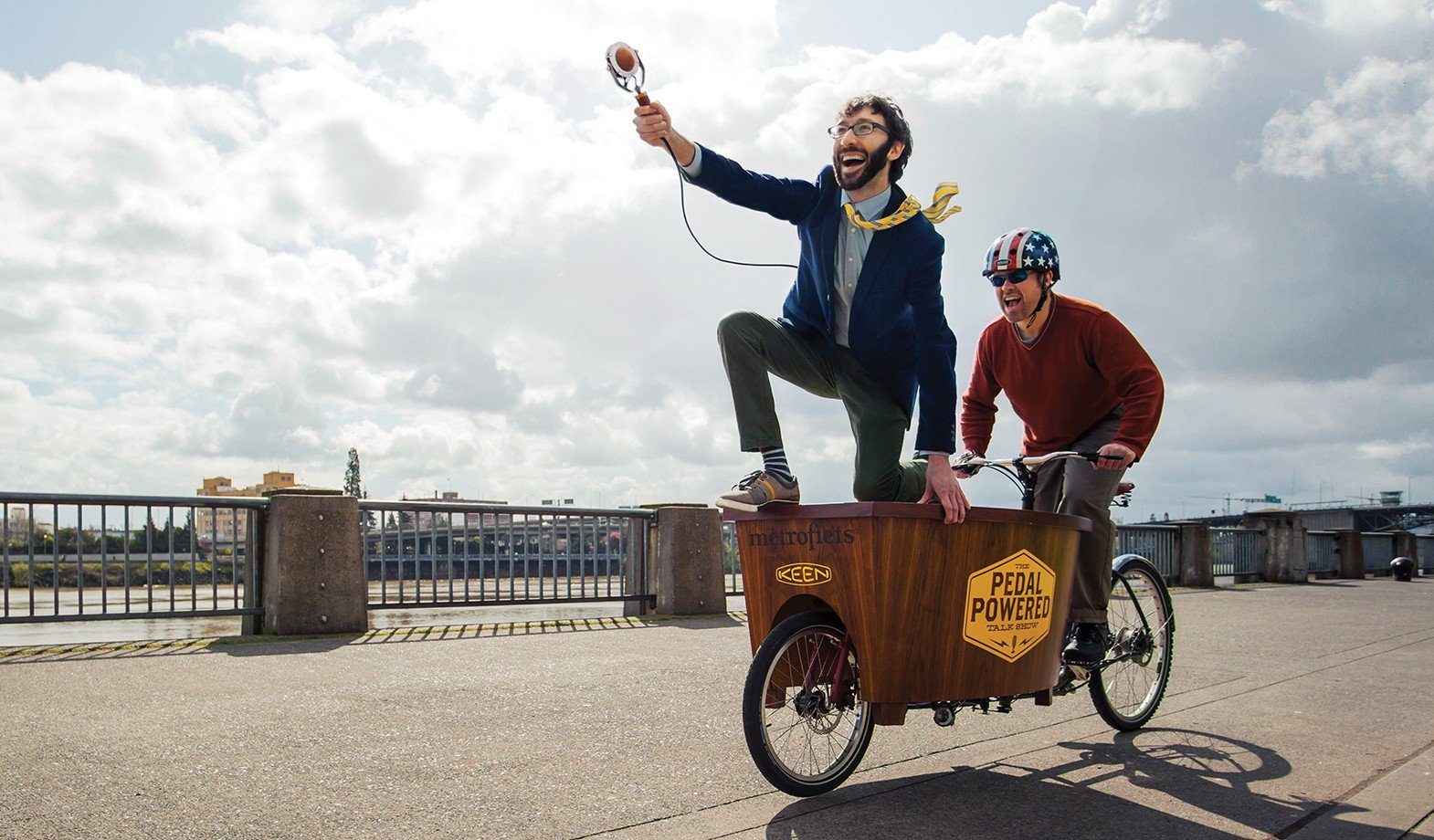 A documentary television series about a personal tour guide to the world of animals.

Director of Photography for final season. Series distributed by Litton Entertainment and programmed on ABC Affiliate stations on Saturdays. Directed by Bryan Curb and Peter Ettinger. 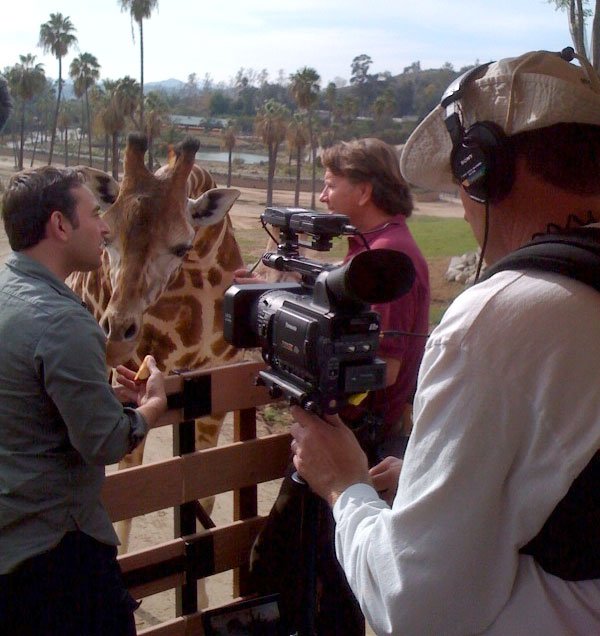 A fabulous movie about how life can be so cruel, but how all that bile can disappear with just one kiss. 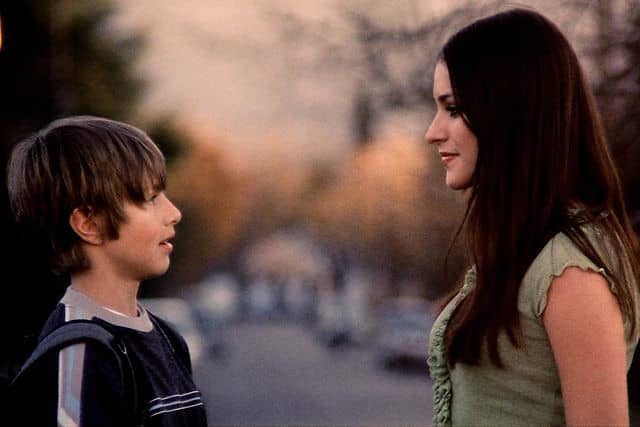 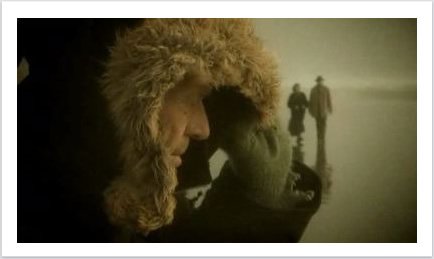 An ironic silent comedy adventure about a man who becomes obsessed with listening to the radio in 1927. Filmed with 1920’s-era hand-cranked 35mm Mitchell camera, this black and white silent short features Craig Sailor as the gullible protagonist who deifies a radio announcer and loses his personal compass. The early days of broadcasting are recreated in detail with music, comedy and politics leaving their mark on our naive hero and reflecting the power of our contemporary entertainment/news media. Filmed in Tacoma with cast and crew from Portland, Seattle and Tacoma. 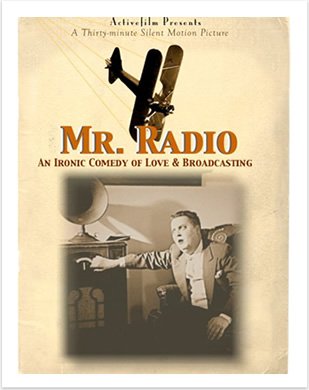 He worked with director David Lynch, shooting the “Log Lady” sequences for the newest season of the critically acclaimed Showtime series TWIN PEAKS: THE RETURN.

Numerous festivals have screened his feature and short film projects. Awards include finalist for best cinematography (Redwood Highway, 2013; Calvin Marshall, 2010; and Light of Mine, 2011) and an award for best cinematography (The Leeward Tide, 2006). Television work includes nationally-syndicated series Food for Thought, Animal Exploration with Jerod Miller, Critter Gitters, and second unit TV movie work for the Disney Channel and Animal Planet. Other credits include music videos for Richmond Fontaine, The Janks, Justin King and the Apologies, Manta Ray and Buellton.

Working in all formats of film and video, Patrick draws on over two decades of experience as a cinematographer and photographer to bring a rich visual style, attention to technical detail, and a creative approach to every project. He also creates stop motion and hand-drawn animation for commercial and creative projects – see more at Mad Bird Design.